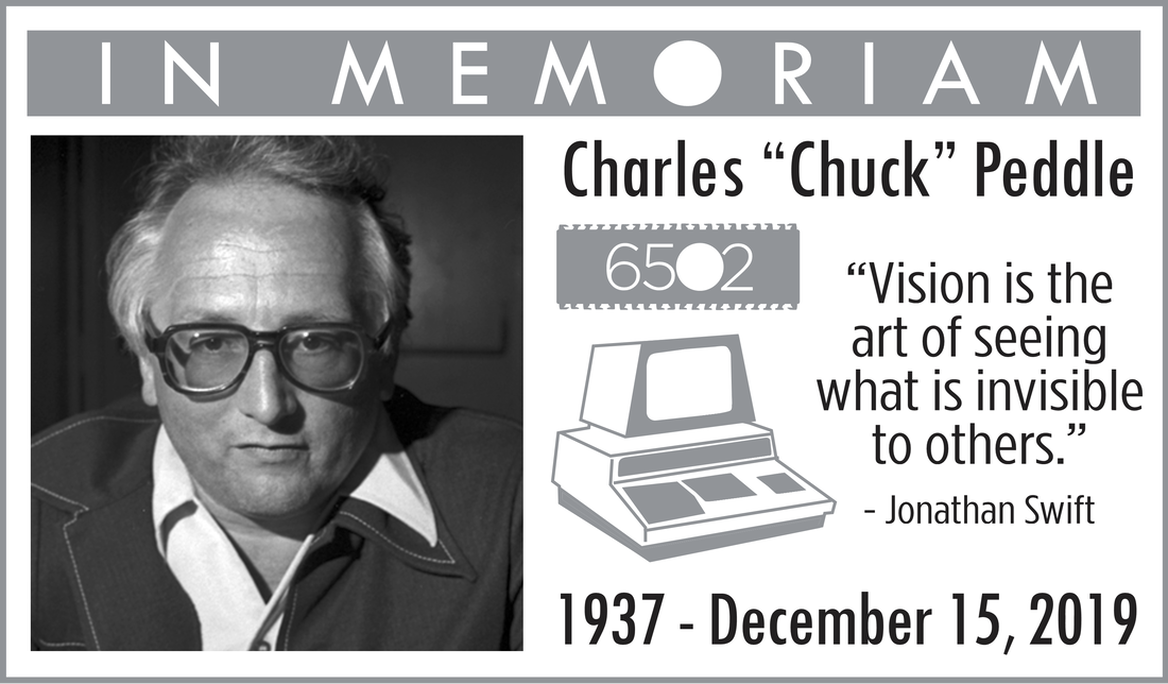 Chuck Peddle was one of the team of eight Motorola employees and engineers who worked on the 6800 microprocessor and left the company for MOS Technology in 1974 along with Harry Bawcom, Wil Mathys, Rod Orgill, Ray Hirt, Mike Janes, Terry Holdt, and Bill Mensch.

A great video about the Team 6502 , a must to see documentary , if  you are interested in Chuck Peddle influence on the 8bit world back on the day. Peddle and Bill Mensch are regarded as personal computer pioneers, in that both the 6502 technology and business model were instrumental in helping launch the personal computer revolution. After his death, Mensch wrote in memoriam of Peddle

Peddle considered the $300 price point of the 6800 a disadvantage, and urged Motorola management to pursue a more affordable microprocessor that could be used in a wider array of applications. When they refused, Peddle convinced seven other Motorola employees, including my father, Terry Holdt, to pack up their homes and move across the country to begin work on what would become the revolutionary 6502 microprocessor at MOS Technology, a wafer-fab company in Valley Forge, PA founded by a former colleague of his from General Electric, John Paivinen. After Commodore Business Machines purchased MOS Technology in 1976, Peddle oversaw the creation of the Commodore PET computer, the predecessor of the Commodore 64, the best-selling personal computer of all time.

While curating the information for the team6502.org website, one of my favorite anecdotes comes from MOS Technology employee, Frank Slattery, who wrote:

What a great bunch of guys the Motorola eight were. I was the manager of the layout people and it was my duty to make sure that the Motorola eight had every opportunity to do their design work with no problems. I was standing next to Chuck Peddle when he said to Jack Tramiel, the CEO of Commodore Business Machines, “With this chip we can build a personal computer.” It was the first time I ever heard the words, “Personal Computer.”

The rest, as they say, is history.

​Chuck was one of the giants of the personal computing industry. Now he belongs to the ages.

you can read about Chuck Peddle on  Wikpedia here:

It is with sadness WDC/I announce that on December 15, 2019, Chuck Peddle passed away. We send our heartfelt condolences to his family, friends and the personal computer industry. We have lost a pioneer with Chuck’s passing.

Some history of Chuck’s and my relationship follows.

I started work on Motorola’s 6800 family of chips in the form of the 6860 MODEM in 1971 as a Motorola trainee right out of The University of Arizona College of Engineering.

Chuck joined Motorola in 1973. In the Spring of 1974, Chuck asked me to head a semiconductor engineering team to design a microprocessor family of chips that the world knows as the 6502 family of chips. We left Motorola as a team on August 19, 1974 to begin work at MOS Technology.

The MOS Technology 6502 introduced in September 1975 at WESCON, was the first of seven (7) microprocessors honored in 1996, the 25th anniversary of the microprocessor, at COMDEX, in the IEEE Chip Hall of Fame and the Smithsonian alongside of the 6800 microprocessor.

While at Motorola Chuck and I were co-inventors, along with others, of the 6800 microprocessor family of chips. The 6820/6821 Peripheral Interface Adapter (PIA) was a revolutionary Input/Output (IO) chip of its day famously used in the Apple-1 along with the 6502. Chuck and I worked closely on the PIA. Chuck’s system level expertise was the reason Chuck was hired at Motorola.

It was in December 1973 that I suggested, to Chuck, that a “Home Computer” could be built with the combination of the 6800, 6820, RAM and ROM. The PIA was designed to control all kinds of things such as industrial things, sprinklers, other things found around the home and at the same time be used by accountants to do accounting things. I had designed a spreadsheet for use in quoting memory chips while a trainee in the Motorola marketing department in 1972. So accounting projects were on my mind at that time.

Chuck’s plan for the 6502, along with the 6530 RAM, ROM, IO, and Timer (RRIOT) another chip  I designed, was to compete with the $29 Intel 4040 4-bit two chip controller. It was the competition with 4040 that caused the $25 price of the 6502 and not the 6800 or 8080. The 6502 and two 6530 chips, one for the keyboard input monitor and one for the Teletype input monitor, were used on the revolutionary KIM-1 Single Board Computer (SBC). Chuck had envisioned the controller market as much larger volume market than computers were in that day and still are today.

In February 1978, Jack Trammel, founder of Commodore, asked Chuck to reach out to me to design CMOS calculator chips for Commodore’s calculator business. Commodore at a CMOS factory in Southern California that would build my designs. The three of us, Jack, Chuck and I, met in Las Vegas on Mother’s Day weekend in 1978. Two weeks later the request to design calculator chips for Commodore was the reason I formed The Western Design Center, Inc. in May 1978. Chuck at that time was the Chief Technology Officer (CTO) of Commodore.

Commodore and Chuck did not want a CMOS 6502. After Jack left Commodore in 1980, we terminated the Commodore-WDC relationship in the Fall of 1980.

More recently, in May of 2007 Chuck asked me and my team at WDC to design what was named The FLASH Controller (TFC). The TFC chip was designed using my 65C02 microprocessor with high-speed DMA features for USB FLASH Modules Chuck planned to manufacture sell. The TFC used Chuck’s patented “page-mode” concepts for replacing bad pages with “good” pages within tested “bad” segments. Chuck wrote the Assembly language code for the TFC. Chuck had negotiated a relationship with FLASH memory suppliers to support his “page-mode” business.

Chuck patented the TFC and granted WDC/me a Patent Royalty Agreement (PRA) as a ROI for our work on the TFC. Chuck’s latest work was on Solid State Disc (SSD) drives, used some of the TFC concepts for high speed DMA transfers.

It is with a heavy heart, I recall the joy of creating, inventing and innovating with Chuck on and off over a forty six (46) year period. I will be forever grateful for his asking me to join him on the 6502 great adventure!! I am missing your indomitable spirit as I write. Rest in peace dear friend!!

More information about the 6502 team can be found here: